The Enterprise of Law: Justice Without the State por Bruce L. Benson 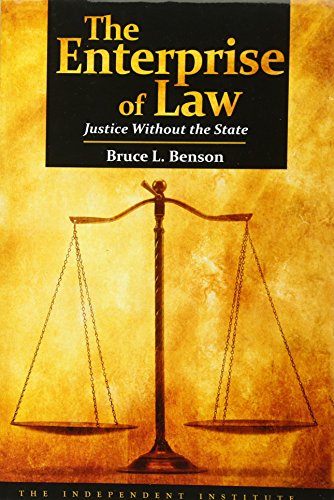 Bruce L. Benson con The Enterprise of Law: Justice Without the State

Críticas ""Benson's book is an important contribution to law and economics literature. He properly emphasizes the role of institutions in shaping incentive and the role of incentives in shaping institutions."" --Henry G. Manne, dean emeritus, School of Law, George Mason University ""Benson's book, The Enterprise of Law, promises to do for privately produced law what [Lawrence] White's work did for free banking. Benson has produced a carefully researched and comprehensive introduction to polycentric law. It is sure to stimulate further work in the field. . . . . I suggest Benson's The Enterprise of Law as the best general overview of the field."" --Tom W. Bell, law professor, Chapman University ""In The Enterprise of Law, Bruce Benson provides us with the most comprehensive treatise on private sector alternatives to government law enforcement available today. Benson systematically addresses all the issues, arguments, and objections surrounding the growing role of market institutions in the legal system. But his book is more than a mere defense of current privatization trends in protective services, corrections, and dispute resolution. The Enterprise of Law questions the seemingly axiomatic proposition that law and order are ""necessary functions of government."" --CATO Journal Reseña del editor In the minds of many, the provision of justice and security has long been linked to the state. To ask whether non-state institutions could deliver those services on their own, without the aid of coercive taxation and a monopoly franchise, runs the risk of being branded as naive anarchism or dangerous radicalism. Defenders of the state's monopoly on lawmaking and law enforcement typically assume that any alternative arrangement would favor the rich at the expense of the poor-or would lead to the collapse of social order and ignite a war. Questioning how well these beliefs hold up to scrutiny, this book offers a powerful rebuttal of the received view of the relationship between law and government. The book argues not only that the state is unnecessary for the establishment and enforcement of law, but also that non-state institutions would fight crime, resolve disputes, and render justice more effectively than the state, based on their stronger incentives. Ver Descripción del producto