When Time Stopped: A Memoir of My Father, Survival and What Remains por Ariana Neumann 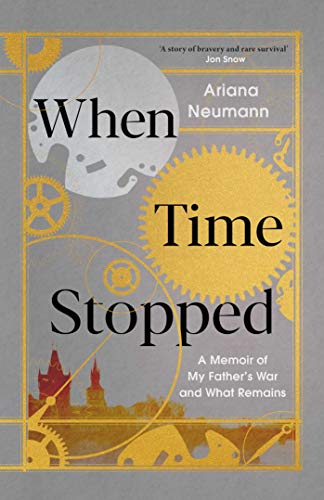 Ariana Neumann con When Time Stopped: A Memoir of My Father, Survival and What Remains

Reseña del editor A brilliantly written memoir by a Venezuelan-born British journalist that skilfully uncovers the secrets of her father's past: the annihilation of his family in the Holocaust, his courageous choice to build his life anew and his extraordinary commitment to hiding the truth from his own family. There is a Czech saying - The darkest shadow is beneath the candle. As a little girl growing up in a flourishing 1970s Venezuela, Ariana wanted to peer into the shadows and be a detective. With no real mysteries to solve, her childish curiosity led her to focus on the enigma of her own father, a brilliant industrialist who appeared to be the epitome of success and strength but who would wake in the night screaming in a language that she didn't recognize. Then, one day, she found an old identity document bearing his picture but someone else's name. Her father never spoke about the past. This was the first of many clues that she was to uncover in the years to come. They led her to a box of papers that he had left for her when he died in 2001. The box contained wartime documents that opened the door to her father's past and finally gave her the permission he had long withheld to step through it. Ariana meticulously uncovers the astonishing truth of her father's extraordinary escape from Nazi-occupied Prague and inevitable deportation to the camps. Her painstaking investigation leads her across Europe and reveals his unlikely and inspiring choice to assume a fake identity and live out the war undercover, spying for the allies in Berlin-deep in the `darkest shadow'. In producing a powerful piece of literary detective work and an important story of survival against the odds, she comes to know the family that had been lost and, ultimately, her own beloved father.